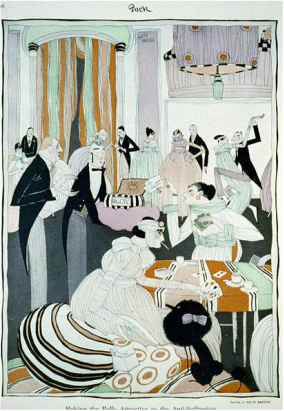 Making the polls attractive to the anti-suffragists. Library of Congress

Helen Kendrick  Johnson believed in Anti-Suffragism and Elizabeth Cady Stanton believed in Women's Suffrage. They both fought passionately for their causes. Suffragettes sacrificed to win women the political right to vote. They  marched, starved, and sacrificed relationships for their beliefs. They were shackled, imprisoned, force fed, ridiculed, hated and some even died  for the right to vote. All through their long suffrage struggle, women faced determined and skillfully organized opposition from the male establishment.

They also had equally determined opposition from their own gender. Women who were as wealthy, socially prominent, educated and  talented as the suffragettes opposed gaining the vote for women.

Not every woman in the late 19th and early 20th century campaigned for the right to vote. A political movement called Anti-Suffragism sprang up in the late 19th century in opposition to the Women’s Suffrage movement. The members of this movement, mostly women, campaigned against Women’s Suffrage in the United States. The Anti-Suffrage movement was closely  linked with “domestic feminism”, the belief that women had the inherent right to be completely free in their own homes.

In Family Fortunes, their study of the 19th century middle classes, Lenonore Davidoff and Catherine Hall argued that “dependence was at the core of the evangelical Christian view of womanhood.”

Throughout the 19th century, women’s lives became more restricted. Reform acts deliberately excluded women from voting and owning property. In previous centuries, wives had participated in family farms and businesses, but as the 19th century progressed homemaking became a vocation. The first duty of a woman became being a good wife and mother.

The Nature and the Role of Women

Both Suffragists and Anti- suffragists agreed that women were gentler, more nurturing, and more caring than men but they disagreed about the implications of the nature of women. Suffragists believed that women should participate in public life to make the world a better place for everyone. Anti-Suffragists argued that women’s femininity and motherliness made them unsuited for politics. They argued that "While desiring the fullest possible development of the powers, energies, and education of  women, we believe that their work for the State, and their responsibilities towards it, must always differ essentially from those of men."

Although Suffragists ridiculed them, the Anti-Suffragettes gained  significant support through public debate, forming leagues and societies,  and by advocating their cause through hundreds of journals, pamphlets and books. They were never as organized or highly visible as the Suffragists,  but they did manage to impede the progress of the Suffrage Movement through their organizations, publications, and political lobbying. A major Anti-Suffrage petition circulated shortly before the First World War contained nearly half a million female signatures.

Anti-Suffragists in New York were especially active. In 1897, the New York State Association Opposed to Woman Suffrage was founded and by 1908 it counted more than 90 members. New York Suffragettes often invited Anti-Suffragists to debate the pros and cons of suffrage. The members continuously produced pamphlets and publications explaining their views about Women’s Suffrage until the Nineteenth Amendment to the United States  Constitution passed in 1920.

Helen Kendrick Johnson was one of the Anti-Suffragists who vigorously campaigned against the Nineteenth Amendment. She was born in Hamilton, New York and her father Ashel Clark Kendrick was a Professor of Greek at the University of Rochester. Her mother, Anne Elizabeth, died when Helen was seven and she spent much of her childhood living with her aunt in Clinton, New York.

In 1869, Helen married Rossiter Johnson, a newspaper editor, and she began  writing children’ stories and travel articles. Eventually, she published collections of quotations, essays, and in 1908, she published Mythology and Folk Lore of the North American Indian. Helen Kendrick and Rossiter Johnson both participated actively in the Anti-Suffrage cause.

Helen is an Editor and an Author

From 1894-1896, Helen became the editor of a small magazine called the  American Woman’s Journal and discovered the issue of Women’s Suffrage. She said that she had no knowledge of suffrage in any of its details, but editing articles in favor of suffrage made her examine her own feelings about suffrage. She expressed them by saying, “I cannot see the slightest possibility that through the ballot woman can secure one right which she does not at present possess.”

In spite of  her personal opposition to women’s suffrage, Helen Kendrick Johnson didn’t let her personal opinions stop her from publishing articles by Florence Nightingale and Elizabeth Cady Stanton. The articles didn’t change her position about Women's suffrage. In 1897, Helen published Woman and the Republic, which is often considered the best summary of arguments against Women's Suffrage.

Helen argued that women could attain more legal, economic, and other equality without the vote. She said that the women’s role in the home was essential to maintain the America Republic. She openly criticized Elizabeth Cady Station’s writing and her work, The Woman’s Bible, linking it to radicalism and socialism.

“Pro-Suffrage Arguments are Illogical and Unworthy”

Helen Kendrick Johnson wrote many newspaper articles and pamphlets about Anti-Suffrage. In  1910, she founded the Guidon Club, an Anti-Suffragette organization dedicated to the study of politics and government and she appeared before many legislative committees in New York and Washington, D.C.

Helen Kendrick Johnson died on January 3, 1917, three years before the Nineteenth Amendment giving women the right to vote became law in the United States. She hadn't changed her opinion of earlier years when she had said, “I discovered that most of the pro-suffrage arguments were illogical and unworthy. They remain so to this day.”

Gilman, Charlotte Anna Perkins, She Wields a Pen: American Poetry of the  Nineteenth Century, “The Anti-Suffragists”, University of Iowa Press, 1997