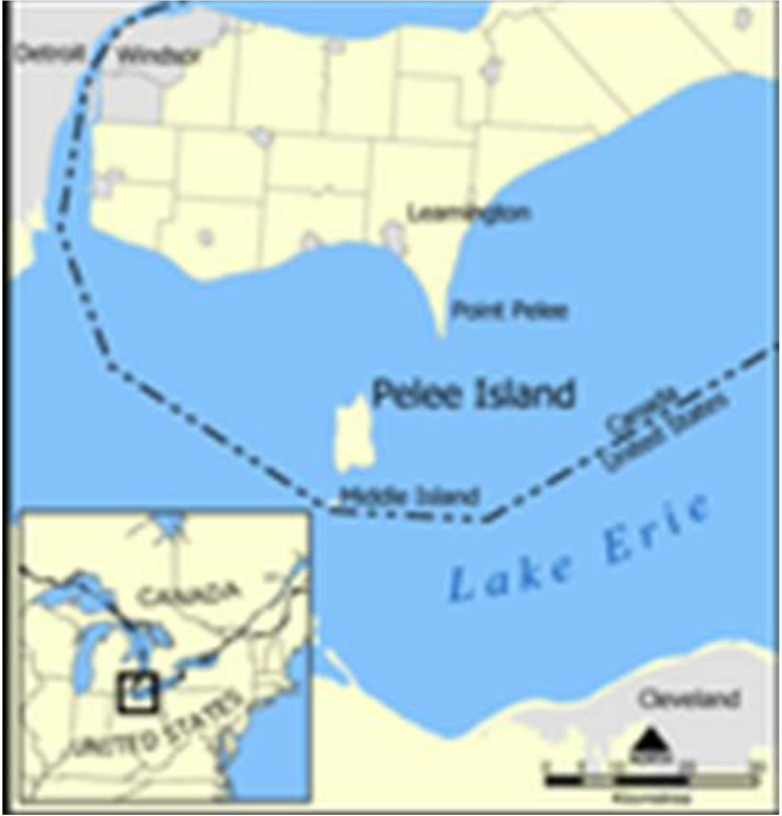 Elizabeth Turner McCormick began her life in Maryland and spent her last years on Pt. au Pelee Island. Her spunk caused her Wyandotte captors to call her “chestnut burr.”

Elizabeth Turner McCormick began her life in Maryland and spent her last years living with her son William on Pt. Au Pelee Island in Lake Erie, near Sandusky, Ohio. In between she enjoyed enough watery adventures to rival Samuel de Champlain.

Elizabeth’s family, the Turners, left their native Maryland and settled in Pittsburgh, Pennsylvania, about 1780. Their nearest neighbors were the McKevars and together the two families toiled to survive in the wilderness. The Natives in western Pennsylvania objected to the white settlers invading their territory and tried to frighten them away by killing their stock and murdering families or taking them captive. Fort Pitt offered a few block houses and stockades for protection, but the settlers in the outlaying areas had to provide their own defense or fight their way to the fort.

Besides defending themselves, the settlers spent much of their time gathering and preparing food. Many of them made maple sugar in the spring to add to their meager stores. They made sap by building a camp in the sugar bush and using open kettles to boil the sap down.

In March of 1780, the Turners and McKevars joined forces and established a sugar camp on the slope of a hill not far from their houses. A Turner boy and a McKevar boy tended the camp and their parents sent their two daughters and a smaller boy to the sugar bush to take the older boys some food and help them in their work.

Winter was breaking up. The sun shone, robins grubbed for worms, and the blue birds whistled. The girls lingered on at the camp, helping their brothers, drinking warm maple syrup and enjoying the camp fire. Finally, they noticed the setting sun and prepared to start for home. Their dog barked, indicating that strangers were approaching. The next sound Elizabeth Turner heard was the crack of rifles. The two older boys fell to the ground, and painted Native Americans surrounded the two girls and the younger boy. The Indians carried their captives into the thick dark woods. This began Elizabeth’s journey into places that she had never imagined existed beyond Pittsburgh.

Elizabeth had fallen into the hands of a band of Wyandotte warriors and soon was separated from the McKevar girl. They boy who had been captured with them became ill and unable to travel, and the Indians killed him. Taking Elizabeth with them, the Wyandotte’s immediately left Pittsburgh and slowly traveled to the Native villages on the lower and upper Sandusky Rivers and to the shores of Lake Erie.

Soon Elizabeth became famous among her Wyandotte captors for her bravery. One time she fought with a another Indian woman, tore the clothes off her, and forced her to run away. Another time while Elizabeth was working a corn patch, her female companions quit working and sat in the shade. Elizabeth also went and sat in the shade. Her female companions threatened her, but she stood up to them so forcefully that they ran to the camp and reported her to the Chief. The Chief and his friends were amused and praised Elizabeth for her bravery. Later she said, “It was not bravery, it was simply desperation.”

The Wyandotte Adopt Elizabeth and She Meets Alexander McCormick

The Wyandottes admired Elizabeth’s spunk so much that they adopted her into their tribe as a sister and treated her as well as they did any other Indian woman.. Elizabeth kept her spirits high and continued to stand up for herself so well that the Natives gave her an Indian name that meant a chestnut burr. They said that she would sting like a burr whenever someone bothered her too much.

Elizabeth had a more difficult time keeping up her spirits on the inside. Months had passed and she hadn’t heard from her family. More months passed and her chances of escaping and getting back home were slim. She now lived in the Native towns in upper Sandusky in northern Ohio, hundreds of miles through the thick woods from Pittsburgh. Once in awhile she talked to a white trader or prisoner, but they didn’t know anything about her family.

In the late fall of 1782, the Wyandotte who held Elizabeth captive left the Sandusky villages and traveled north to the Maumee country in the vicinity of where Toledo, Ohio, now stands. There they met a Shawnee tribe. Elizabeth noticed that one of the Natives was really a white man, although he dressed and acted like a Native. She discovered that he was a Native trader who had been adopted by the Natives and had been with them for eight or nine years. His name was Alexander McCormick.

Alexander McCormick was surprised to see a white woman living with the Wyandotte and he and Elizabeth soon became friends. Elizabeth was thrilled to have a white friend who could possibly help her escape and go home.

After a few months, Alexander asked Elizabeth to marry him, but she couldn’t accept his offer. She had a fiancé back in Pittsburgh and she felt that even though three years had passed she had to be true to him. Alexander begged her to reconsider her engagement. He told her that she probably would never see her fiancé again. He said that her fiancé probably had married someone else or perhaps the Indians had killed him too.

Finally Elizabeth agreed to marry Alexander, but he had others to persuade as well. The Wyandotte wouldn’t let Elizabeth leave their tribe and they refused to give her to Alexander. Alexander paid a generous ransom to the Natives for Elizabeth, but when he came to take her away the Natives regretted their bargain and refused to let her go. Alexander didn’t give up. He decided to steal Elizabeth and run away with her to Detroit.

While Elizabeth lived in the Sandusky villages, she met Alexander McCormick and agreed to marry him. The Wyandotte refused to release her, so Alexander kidnapped her.

Wyandotte Natives had taken Elizabeth Turner captive near Pittsburgh and adopted her into their tribe. She met Alexander McCormick there and agreed to marry him, but the Wyandotte wouldn't release her. Alexander came up with a plan.

When the spring of 1784 arrived, Alexander collected furs and skins to be loaded in row boats at Maumee City. From there he would take them to Detroit as he had in the past. He got everything ready and arranged to meet Elizabeth. He hid her in the bottom of one of the canoes and covered her completely with skins.

Eventually, the Wyandotte missed her and they suspected that Alexander had something to do with her disappearance. They searched his canoes for Elizabeth and came to the one where she was hidden. The Indians unloaded the skins and piled them inside the canoe. There were only a few skins left in the bottom of the canoe when the Wyandotte gave up the search for Elizabeth.

Alexander got the canoes underway as soon as the Wyandotte left. The canoes slowly floated down the Maumee River into Lake Erie. Alexander and his party followed the lake shore and camped on land at night. They struggled up the Detroit River against the current, and finally reached Detroit safely. Alexander took Elizabeth to the house of one of his Detroit friends, Colonel Allen. He outfitted her with new dresses, including the best wedding dress and outfit in town. They were married at Colonel Allen’s house in May 1783, by an Anglican Church minister. Alexander was at least forty years old, and Elizabeth twenty-one when they were married.

Elizabeth Decides to Visit Her Family in Pittsburgh

After Alexander and Elizabeth were married, they prepared to return to the Native settlements on the Maumee since Alexander preferred to live with the Native and keep up his fur trade. He made money as a trader and planned to buy land and make a permanent home. Elizabeth, too, knew Native life and liked it well enough. They toiled back up the lake shore in their canoes.

Arriving safely at Maumee City, the McCormicks settled into frontier life. On May 30, 1784, they had a son named William, the first of a family of four sons and four daughters born to the McCormicks. William would later become a member of the Canadian Parliament and the first white owner of Point au Pelee Island.

As the months passed and her son walked and talked and grew bigger, Elizabeth wanted to take him to visit her old home in Pittsburgh. She wanted to let her old friends and family know that she was still alive. The journey would be a hard one over two hundred miles of woods filled with roving bands of Native Americans.. Alexander couldn’t leave his business to go with her, but Elizabeth decided to go anyway, choosing an old Native woman friend to go with her.

Her Former Fiance Releases Her

Alexander gave them two horses and carrying William in her arms, Elizabeth and her Indian woman friend set out. There were no welcoming houses along the route for shelter, not even Native houses.

After a long and tedious journey, Elizabeth, William, and her Native friend arrived in Pittsburgh. Elizabeth had come home after four years of silence. Elizabeth’s father and mother felt that they were seeing a daughter risen from the dead. They had not known what had become of her and now she brought them a grandchild! Elizabeth found her fiancé alive and unmarried, but she assured her that he didn’t blame her for marrying Alexander McCormick under the circumstances.

Elizabeth visited with friends and family for a few weeks, and then she and William and her Native friend returned to Alexander and Maumee City the same way they had come – on horseback.

The McCormicks Move to Canada

When he American Revolutionary War ended, Alexander McCormick made a decision. His sympathies were with the British and many of the Americans considered him an enemy. Since he was more of a Loyalist than an American, somewhere between 1788 and 1793, Alexander gathered up his family and they traveled to Detroit. They crossed the Detroit River into Canada where the English government had granted Alexander 200 acres of land in Colchester Township, near the shores of Lake Erie. The country was unsettled and Indians still plentiful.

Alexander traded and farmed enthusiastically and Alexander and Elizabeth enjoyed a long and happy married life together.

After Alexander died, Elizabeth came to Point au Pelee Island to live with her son William who had moved to Pelee in 1834 with his wife and eleven children. William farmed and raised stock. Horses, hogs, and cattle multiplied and ran wild in the dense woods and marshes. The McCormicks built a sawmill in 1836 and their men sawed red cedar timber into railroad ties that were shipped throughout the Midwest.

Elizabeth lived on Pelee Island for several years. In 1839 she was visiting friends and family in Colchester Township when she died at age 77, traveling and courageous to the end.