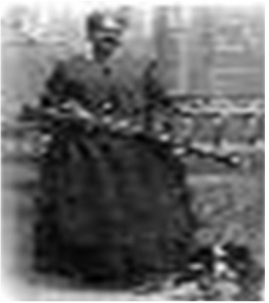 Mary Field valued friendship and lyalty enough to uproot her life for them. She also toted a gun, drank hard liquor, and made flower bouquets for her baseball team. A picture of Stage Coach Mary Fields with a dog at her feet projects the gentle virtues of friendship. love, and loyalty, and these virtues motivated Mary throughout her life. The gun that she is holding and the myriad of documented sources that say she used it frequently and effectively, highlights some of the other elements of her personality including brashness and courage.

Mary’s career was as checkered as her personality. She began her life as a slave in Arkansas and ended it as a babysitter in Cascade, Montana. In between she worked at a convent in Toledo, Ohio, fought a duel and won countless fistfights, drank hard liquor, wore men’s clothes, smoked black cigars and delivered mail by stagecoach. She overcame the obstacles of being black and female in 19th Century America and served as a vital example of the pioneering spirit that settled the West.

Life for Mary began in 1832 or 1833- she didn’t know exactly which year so she always celebrated two birthdays. Accounts of her birth state- some say Arkansas and some say Tennessee- and owners differ.

// Some sources say an Arkansas family by the name of Warner owned Mary and one of the daughters of the Warner family married a Dunne. Other sources have it that Mary was the confidential servant of Judge Dunne, the oldest brother of Sara Therese Dunne, and Mary and Sara formed a close relationship. However it happened, Mary became acquainted with Sara Therese Dunne and eventually followed Sara to the Ursuline Convent in Toledo, Ohio. Sara Therese Dunne ultimately became Mother Amadeus.

By the time Mary Fields stepped off of the train in Toledo, Ohio, in 1878,she stood tall and muscled and weighed over 200 pounds. Mary quickly set about making friends and carving her niche in convent life. She did laundry, bought supplies, managed the kitchen, tended the garden and grounds, and endeared herself to the sisters.

Life at the Ursuline convent moved along smoothly for Mary until 1884, when Mother Amadeus went west to Montana to open a school for Blackfeet Indian girls at St. Peter’s Mission near Cascade, Montana. The harsh climate and primitive living conditions at the school took their toll on Mother Amadeus’ health and the Ursuline sisters in Toledo received a message that Mother Amadeus lay dying in a crude log cabin.

Mary Fields hurried to Montana to see her friend. She nursed Mother Amadeus back to health and settled in to work. Mary helped build a new stone convent for the sisters and after eight years the convent was finally finished and Mary and the sisters moved from their log cabins into the convent. Mary hauled the freight for the convent, guiding her team through dangers she had not imagined in Toledo. One time a pack of wolves frightened her team and they upset her load of supplies into the snow. Mary stood guard over them all night.

On another trip, a blizzard overtook them and Mary walked herself and the team back and forth all night to keep them all from freezing to death.

Mary Delivers the Mail by Stagecoach

If Mary had been less brash and hot tempered and frequented the saloons less often, she might have spent the rest of her days peacefully at the convent with the nuns that she adored and who adored her. Her impetuous nature didn’t allow that to happen. She constantly argued with the hired men. In fact, the story goes that she fought a duel with one of them. People who didn’t see Mary’s faithful and loyal heart under the bluster and profanity complained about her to the territorial bishop and he ordered the sisters to “send that black woman away.”

Mary stormed all the way to Helena to see the Bishop “to make him bring witnesses to swear what they have said against me.” Her efforts didn’t soften the Bishop’s heart and he removed her from the convent because of her “sinful life.”

The nuns had to obey the Bishop, so a broken-hearted Mary left the convent. Mother Amadeus tried twice to set Mary up in the restaurant business, but Mary’s kind heart made her business fail. She continually fed people who couldn’t pay and carried so much credit on her books that she couldn’t stay in business. Mother Amadeus, probably behind the Bishop’s back, went to the government and convinced them to give Mary the stagecoach mail route from Cascade, Montana, to the convent. For eight years Stagecoach Mary drove the stage coach mail route, proudly wearing her male clothes, smoking her black
cigars, and never missing a day of work.

In 1903, the Church sent Mother Amadeus to Alaska to found a new mission and Stagecoach Mary didn’t have the heart to continue delivering the mail. Mary Fields pushed close to 70 when she stopped her mail route to start a laundry business in town, but she hadn’t lost her bluster. One day when she sat drinking in a Cascade bar, a man came in who owed her a $2.00 laundry bill. She chased him down an alley, caught him, and thoroughly punched him. Then she returned to her seat at the bar reporting, “He doesn’t owe me two dollars anymore.”

Mary’s laundry business burned in 1912, and the townspeople donated time, labor, and materials to rebuild it and her home. The people of Cascade loved Stagecoach Mary and invited her to eat for free at the local hotel. She became the mascot of Cascade’s baseball team in her old age. She made buttonhole bouquets for each player with flowers from her own garden and full bouquets for the home run hitters.

In her final years, Stagecoach Mary worked as a babysitter, charging $1.50 a
day. She spent nearly all of the money she earned buying candy for the children
of Cascade.

When Stagecoach Mary died in 1914 at the age of either 81 or 82, the
townspeople of Cascade turned out for her funeral. They buried her at the foot
of the mountains near the winding road that led to the mission and convent that
she had loved so well.