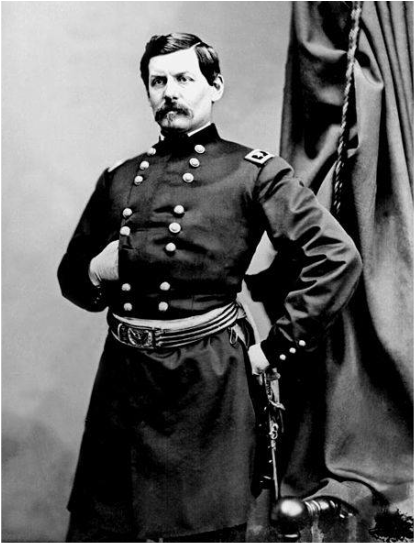 Nadine Turchin Fights Alongside her Husband in the Civil War

The story of Nadine Lvova Turchin begins in Russia where she was born in 1826, unfolds on the battlefields of the American Civil War, and ends in Illinois.

Princess  Nadezhda Lvova descended from an ancient noble family. Her father was a colonel in the Russian Army and her  uncle, Prince Alexei. Lvov, was a noted composer. Although she was brought up in army camps, she received an excellent education. Besides being the pet of her father’s regiment, she read extensively and became proficient in four languages.

When Nadezhda was thirty, she married Ivan Vasilovitch Turchaninov, her father's Colonel of Staff in the Russian Guards. Ivan Turchaninov was born into a Cossack family in Russia and attended the Imperial Military School in St. Petersburg. Ivan fought in Hungary and in the Crimean War.

Nadezhda and Ivan were married on May 10, 1856, in Krakow, Poland, three months after the Crimean War ended. Later that year, they immigrated to the United States and eventually settled in Mattoon, Illinois, where Ivan worked for the Illinois Central Railroad. They also anglicized their names to John Basil and Nadine Turchin.

John Turchin worked for the Illinois Central Railroad until 1861, when he resigned to accept a commission as the colonel of the 19th Illinois Infantry. When the regiment went into training at Quincy, Nadine went with her husband, despite orders against wives travelling with campaigns.

During the march into Tennessee in the spring of 1862, Colonel Turchin was taken seriously ill, and for some days was carried in an ambulance on the route. Nadine Turchin nursed her husband during his illness, and also filled his place as commander of the regiment.

She led with such an even hand that there were no complaints or mutinies against being commanded by a woman. In the battles that followed, Nadine was constantly under fire, encouraging, nursing, and rescuing the men. The soldiers in the field called her Madam Turchin.

Colonel Turchin is Pardoned and Promoted

Following the orders of General Don Carlos Buell, Colonel Turchin occupied the town of Athens, Alabama, on May 2, 1862. He allowed his soldiers to terrorize the townspeople of Athens and the townspeople estimated the damage to be $55,000. General Buell refused to accept Colonel Turchin’s resignation and insisted on a court martial. Nadine Turchin hastened to Washington and used her diplomatic skill to plead his cause with President Abraham Lincoln.

On July 30, 1862,  Colonel Turchin was convicted, but President Lincoln pardoned him. He was discharged from the Army and departed Huntsville by train, arriving in Illinois to a thunderous welcome.

Nadine Turchin Expresses Her Feelings in a Diary

Colonel Turchin was given command of a new brigade and again, Nadine Turchin went with him. In 1863, she began to keep a diary.She considered her diary a discrete safety valve or as she termed it, “I think that it is an excellent idea to write a diary in the present situation. These pages, in which I speak frankly as I think, are a true safety valve for anyone who is neither patient nor discreet.”

She included her opinions of her husband’s fellow officers in her dairy as well as accounts of battles that she participated in, including Chickamauga fought from September 19-20, 1863. During the Battle of Chickamauga she stayed with the brigade and division wagons parked on the western edge of the battlefield. During the Battle of Missionary Ridge on November 25, 1863, she climbed onto the eastern hills of Missionary Ride to watch the battle. She left detailed accounts of both battles, which made her the only Union female diarist of these battles.

Madame Turchin Leads the Troops, but is Skeptical of the Union Leadership

Madame Turchin remained in the field with her husband, in all of the campaigns of the West. She usually cared for the wounded, but if need be she led the troops into action, showing no fear of shot, shell, or whizzing mini balls falling around her. Although she constantly faced enemy fire, she didn’t receive a scratch.

Nadine Turchin viewed the volunteer Union Army skeptically and disdained its military leaders. Despite her reservations, she remained intensely loyal to the North. She expressed her hopes for the United States by saying, “Let us hope that the immense efforts and the countless sacrifices of the people will bring about a rational direction to the nation’s destiny despite the ineptness and treachery that occur in the leadership of the movement.”

Nadine Turchin and Her Heirs Preserve Her Diary

After distinguishing himself at Chickamauga and Missionary Ridge, Colonel Turchin resigned from the army in October 1864, after suffering heatstroke on the campaign.

Colonel Turchin and Nadine returned to Chicago. For a time he worked as a patent solicitor and civil engineer. Later, as part of his real estate transactions, he helped immigrants settle in southern Illinois. Colonel Turchin suffered dementia, attributed to heatstroke. At age 79, he died penniless in an institution in Anna, Illinois.

After Colonel Turchin died on June 18, 1901, Nadine was penniless until Michael D. Pawlowski, her legal guardian and benefactor, helped her obtain a pension. When she died on July 17, 1904, Michael Pawlowski inherited her possessions, including the diary. The diary remained in the Pawlowski family for 75 years, and then they donated it to the library of Northern Illinois University. Nadine and her husband John are buried in Mound City National Cemetery, Mound City, Illinois.

Chicoine, Stephen, John Basil Turchin and the Fight to Free the Slaves, Praeger, 2003