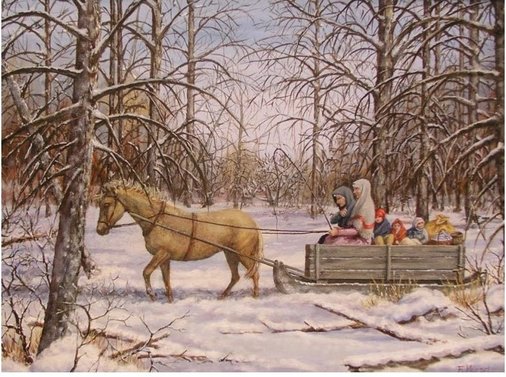 Rachel Sly (Schley or Fry, according to Knaggs family genealogy and Wing’s History of Monroe County) Knaggs  and her daughter Elizabeth probably had their parasol moments. After all, George, their husband and father, had been born in England- but the moments didn’t last long. Rachel and Elizabeth were too busy trading with the Native Americans, teaching their children, escaping from British soldiers and managing farms alongside the River Raisin in Michigan Territory.

The Knaggs family history says that George Knaggs, was an Englishman of good family. Undocumented family tradition assigned him the occupation of a sea faring man, made him a friend and protégé of Sir William Johnson and afforded him the rank of an officer in the British Army. Family documents prove that George Knaggs married Rachel Sly (Schley) in 1760. Rachel’s family had Dutch origins and she was born in the Mohawk Valley in New York State. She married George Knaggs in Philadelphia and they moved to the Maumee Valley in the Ohio Country the same year.

George Knaggs built a family homestead along the Maumee River about eight miles from Toledo after the Ottawa Indians awarded him a land grant, and he and Rachel operated an Indian trading post. Since little money circulated in these early settlement days, the Indian trade relied on barter. Goods that Rachel and George bartered included muskets, powder, balls, blankets, kettles, knives, beads, trinkets, and fire water. The Indians mostly offered furs in exchange, and occasionally maple sugar. Rachel had great force of character, she managed prudently and carefully, and she functioned as the business head of their trading with the Indians.

Rachel Educates her Children and Is Widowed

Elizabeth and her brothers and sisters were baptized at the Huron Jesuit mission at Sandwich, Ontario across from Detroit. Although George may have been Protestant or indifferent to religion, Rachel was a devout Catholic and brought up her children in that faith. Rachel was educated and versed in Latin, an unusual accomplishment for a woman of her times. She taught all her children Latin, Dutch, French, and the other subjects covered in an elementary school education.

Family tradition had it that George was quite aristocratic in his ideas and he objected to his daughters doing any household work. “There are servants for such things,” he insisted.

George and Rachel moved to Detroit about 1794 after General Anthony Wayne’s troops destroyed their trading post buildings, acting on the rumor that George sympathized with the British.  The Knaggs family history states that George and Rachel and their children had a store and dwelling within the stockade at Detroit. How George met his death is disputed. The family history says that he died in Detroit in 1797 and John Askin administered his will. Another family story contends that George went to sea on a whaling voyage and never returned. Whatever the cause of George’s demise, he left Rachel behind to support herself and their small children.

Rachel continued to be a level-headed business woman. A reliable witness swore that before July 1, 1795, he saw Rachel in possession of the premises on the River Raisin, consisting of house, stores, stables, etc. and about 12 arpents – an old French land measure equivalent to about an acre –  were cultivated. She operated the store and continued to trade in furs with the Indians. Records show that she was a taxpayer on the Raisin in 1802.  The American State Papers show that in 1808, Rachel Knaggs preferred her claim before the United States Land Board as owner of 275 arpents being 2 ¾ x 108 arpents fronting on the River Raisin, in the rear by unlocated lands, above by lands of Giles Barnes, and below by lands of Thomas Knaggs, her son.

May Stocking Knaggs married a great-grandson of George Knaggs and Rachel Sly. In Volume 17 of the Michigan Historical Collections George Knaggs Family reminiscence, she wrote that she possessed a parchment bearing the signatures of James Madison, president and James Monroe, Secretary of State. The document dated May 30, 1811, granted Rachel Knaggs 259 acres on the north side of the River Raisin in Frenchtown. This is probably a patent on the same property as 275 arpents are about equal to 259 acres.

War Comes to the Knaggs Family in Frenchtown

Rachel Knaggs and her children prospered in Frenchtown until the War of 1812. Her daughter Elizabeth had married Colonel John Anderson who commanded the 2nd Michigan Territorial Militia Regiment at the beginning of the War and they operated a Frenchtown trading post.

All of Elizabeth’s five brothers ignored the terms of General Hull’s surrender and continued to fight the British.
James Knaggs fled Michigan Territory with Isaac Lee’s detachment of Michigan militia and fought at the Battle of Mississinewa , part of General William Henry Harrison’s campaign against the Miami Indian villages along the Mississinewa River in Indiana.  He also served as a private in Captain Lee’s Company of Dragoons, “River Raisin men are the best troops in the world,” and became an expert spy, scout and ranger. In 1813, he fought in the Battle of the Thames, under Colonel Richard Mentor Johnson and according to the Lyman Copeland Draper manuscripts, he helped identify the body of Chief Tecumseh who was killed at the Battle of the Thames. Whitmore Knaggs accompanied General Winchester and he was captured with him at the Battle of the River Raisin on January 22, 1813. He spent in the rest of the war in a Quebec prison.

After General William Hull surrendered Detroit and over 2,000 men to General Isaac Brock on August 16, 1812, Colonel Anderson and other militiamen left Frenchtown because of Indian threats. Elizabeth Knaggs Anderson stayed behind to run the family trading post located on what is now Elm Street in Monroe. The family used part of the house as a residence and the rest as a store and fur trading post, supplying the Indians with goods and fire-water. All of the brothers served as spies for Captain William Wells who was killed at Chicago.

Elizabeth spoke various Indian dialects, and as a clerk and helper in the store knew most of the trading Indians well. When she heard that General Winchester and his forces had been captured, she sprang into action. Fearing that the Indians would come to ransack the trading post and raid the liquor stores, she hurried to the cellar where they kept barrels of whiskey and she and a few helpers knocked in the heads of the barrels.

The Indians ransacked the store and then stormed into the cellar, lying flat on the floor to drink as much whiskey as they could. When they had finished the whiskey, they thundered back upstairs to the house, yelling and whooping. They emptied the scalps they had gathered in bags on the parlor floor and then danced around the room, slapping the bleeding scalps against the walls. Elizabeth sat in the adjoining room on a large chest, some versions of the story say with a baby in her lap,  which held money and valuables. The Indians discovered her and advanced toward her with upraised tomahawks and knives. They ordered her to get up from the chest.

Shouting at the Indians in turn, Elizabeth pointed at them and said in their own language: “Shame, so many Indians fight one squaw.”

Two determined friendly Indians intervened and eventually they all departed, leaving Elizabeth and her treasures intact. Elizabeth fled to Detroit with her three children, John, Alexander, and Eliza where she rented a house and took in boarders to sustain them until her husband returned from Ohio.

The British victors of the Battle of Frenchtown, especially General Isaac Proctor according to Wing’s History of Monroe County,  ordered 80-year-old Rachel Knaggs to leave Frenchtown. She made the 33-mile trip from Frenchtown to Detroit through the woods in an open traineau or sled, where several friends and relatives welcomed her. When they asked her why she hadn’t frozen, she answered, “My spunk kept me warm.”

Later, Rachel returned to her home in Frenchtown, but in a short time relocated to her farm on the River Raisin, seven miles above Monroe. For several years she operated a store at Green Bay, Wisconsin, which she visited periodically. She dealt mainly in furs, but also distributed a large quantity of bear oil which people of those days demanded to dress their hair.

Rachel wrote her will dated December 4, 1813 in French, appointing Gilbert Lacroix as executor, and in her will she gave adjoining farms each fronting three arpents on the River Raisin, to her sons Thomas and William Knaggs. She attached some conditions to the inheritance when she required them to pay a cash bequest to  her daughters Elizabeth Knaggs Anderson and Rebecca Knaggs, her son Whitmore Knaggs and the children of her deceased son George Knaggs who died in Detroit in 1809. The balance of the estate she willed to be divided between her sons William and James. Rachel died in 1816 and George McDougall of Detroit issued letters of administration on July 1, 1816.

The records don’t show where Rachel died, but Mrs. Keysor, widow of George Knaggs of Maumee, says that she died at Green Bay, then in the territory of Michigan, but now in Wisconsin. She was buried on her home farm.
Elizabeth and her husband Colonel John Anderson are buried in Woodland Cemetery in Monroe. James Knaggs is buried in the Old Burial Ground in Monroe and Whitmore is buried St. Anne’s Church graveyard in Detroit.
Time has flowed along with the River Raisin and erased  Rachel and Elizabeth’s farm homes and stores, but their courage and contributions are still imprinted in Monroe history.