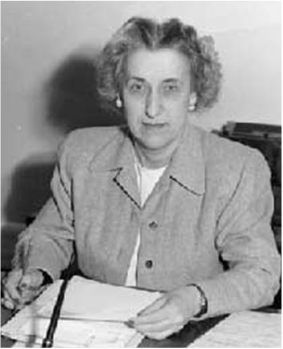 “No man ever had a more loyal secretary and one who knows the score,” President Truman said of Rose Conway.

Her opinion of him was remarkably similar. "He’s the perfect boss. He’s a good organizer and he never says a cross word to me.”

Rose and her Mother Graduate from the Same CollegeLike her famous boss, Rose Conway was a confirmed Midwesterner. She was born in Emporia, Kansas, around 1900,and moved to Kansas City with her parents as a baby. Her father, Martin Conway, was an engineer on the Rock Island Railroad for 50 years. Her mother Margaret Heatherly Conway was valedictorian of the first graduating class at the Academy of Mt. St. Scholastica College, now a part of Benedictine College in Atchison, Kansas.Rose too, graduated from Mt. St. Scholastica and attended business school in Kansas City.

Rose Works for John Vivian Truman for a DecadeAt age 21, she began the secretarial career that took her to the White House. Her first job was secretary to one of her uncles, an Oklahoma banker. She learned from her uncle that a bank’s business is very confidential and employees should not betray confidences. One of Roses’ favorite mottos were “Never talk shop after office hours.”

For a time Rose worked for an insurance executive and then for ten years as secretary to John Vivian Truman, District Director of the Kansas City Area Federal Housing Administration. John Vivian told his brother, Harry S. Truman, then a senator, about Roses’ efficiency.

“The President called me into his office to tell me of my appointment,” Rose recalled. “He told me to do as I always had done: be yourself and keep your eyes and ears open.”

Rose felt that her appointment as personal secretary to the president was “the biggest thrill of my life.”

Rose Conway Reports for Work at the White HouseRose reported for work at the White House the day after Franklin Roosevelt was buried at Hyde Park. At first things were bewildering, even to her highly skilled and organized mind. All that Sunday she coped with a deluge of telegrams and letters pouring in for the new President. She also had to type draft after draft of his first message to Congress, which was to be delivered the following day. From that hectic beginning day, she typed the reading copy of every Presidential speech that Harry S. Truman gave.

Rose Conway Keeps SecretsDuring the course of her day with President Harry Truman, Rose heard many important secrets. Once she was away from her desk, she forgot them. Once a reporter asked her if she found it difficult to keep secrets. “What secrets?” she asked him with a smile.

In fact, she was so close-mouthed that among her Washington associates and the newspapers, she was known affectionately as “Zipper Lip.” The reporters liked her and described her as “A quiet, efficient, attractive, hard working woman. And she never has anything to say – especially about her work.”

Like her boss, Rose Conway had a remarkable memory for dates and events, but she also kept meticulous records and she knew exactly where to find everything in the office. President Truman was never kept waiting. She also didn’t waste time chatting, and she was on the reserved side both in personality and dress. She was probably the most retiring of the entire Truman staff. Co workers recall that Rose was of slight build and thin, with fine features and a wise look in her hazel eyes.

Home to Kansas City with the TrumansWhen President Dwight David Eisenhower was inaugurated in January 1953, Rose did the wise thing. She packed up the same day and left Washington on the afternoon train with Mr. and Mrs. Truman. She went home to Kansas City, but she didn’t have to job hunt. The President asked her to continue her position as his secretary and she agreed. In Kansas City, Rose managed the Truman office, first in the Federal Reserve Building in downtown Kansas City and then at the Truman Library until she retired from there in 1975.

Honors and AccoladesBesides being the perfect secretary, Rose Conway collected a list of honors. She was most proud of an honorary doctor of law degree that her Alma Mater, Mt. St. Scholastic awarded her in 1949. Other awards she won included “Woman of Achievement” from the Kansas City Chapter of Theta Sigma Phi, national honorary for women in journalism and the Truman Library Institute made her an honorary member. In 1977 she was declared an honorary member of Battery D, 129th Field Artillery – the unit that Captain Harry Truman had commanded in World War I.

On March 17, 1980 Rose died in Kansas City, Missouri, but her important work at the Truman Library and the memory of her faith and loyalty endures.