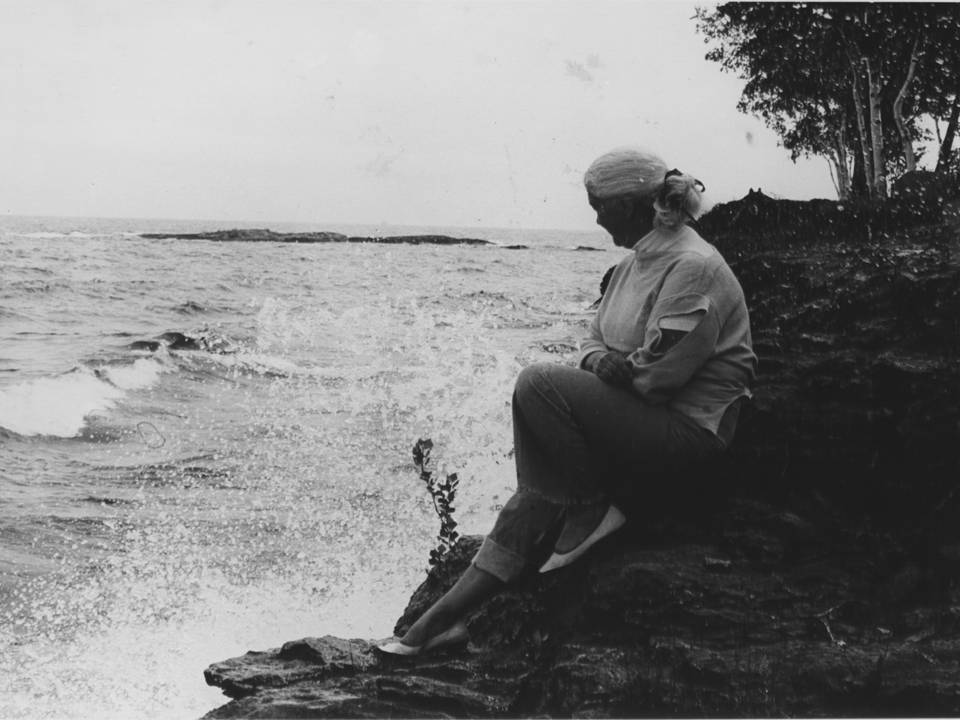 I am not an environmentalist…I am just trying to protect what has made this town more beautiful than any other little city in the world, I don’t care about the mines. If the people in Ishpeming want them, I don’t care. I only want to save Presque Isle Park.”   -Julia K. Tibbitts

Born on October 1, 1917, to Otto and Nota (Schaffer) Koch, Julia Koch was raised in Onota, just 25 miles east of Marquette in Michigan’s Upper Peninsula.  She graduated from Principia Upper School in St. Louis, Missouri in 1936, and from  Ogontz School for Young Ladies in Philadelphia, Pennsylvania in 1938, and earned a degree from Northern Michigan University in 1965.

From an early age, Julia loved Presque Isle, a wooded peninsula outside of Marquette that jutted into Lake Superior.The power plant at Presque Isle located at the mouth of the Dead River, less than one-quarter of a mile from the entrance to Presque Isle Park in Marquette, provided electric power for Cleveland Cliffs Incorporated. Cleveland Cliffs Iron Company of Cleveland, Ohio, and Marquette, Michigan was a corporate landholder in the Upper Peninsula of Michigan, where it mined millions of tons of iron ore.

In her book, Let’s Go Around the Island, Julia K. Tibbitts reminisced about the central part that Presque Isle played in her life and in the lives of other Marquette citizens. She remembered walking the beaches for hours after they parked the family wine red “Apperson” in the shade at the house of caretaker Bob Hume, a family friend.  They picnicked at the pavilion, a large barn-like building on the western shore and they also square danced in the pavilion. She and her future husband Munro Longyear Tibbitts belonged to a club that met there every week.

Julia noted that “the music would flow out into the night air from the happy dancing as cars passed by on the drive outside.”

She recalled the one way drive all around Presque Isle, walking, riding their bicycles, or skiing or snowshoeing around it.

Julia married her high school sweetheart Munro Tibbitts who forged a corporate career in real estate. He served as president of the Longyear Realty Company of Marquette – a corporation created to execute the legal provisions of the will of his uncle John Munro Longyear who owned timberlands and iron mines through the region.

Munro Tibbitts also was the president of several smaller corporations as executor of lands and mines that other people had owned jointly with John Munro Longyear. Millions of dollars worth of holdings were managed through his office.

Presque Isle is in Peril

Julia enjoyed her position as a corporate wife until Monroe Tibbitts died on April 17, 1973.

Julia and Munro were married for 33 years and raised two sons, Richard and Frederick. She described herself as living “the most insulated life of anyone I’ve ever met. The arms of marriage, the arms of children/parent relations, the arms of the secure housewife in a secure small town in a secure known world which I loved with all my heart, certainly precluded any change. Grow I did not. Sleepwalking is a bit more like it…”

Julia’s innocence evaporated with her involvement with Cleveland Cliffs, the Upper Michigan Power Company, and  the Michigan Department of Natural Resources during her effort to save Presque Isle Park and Presque Isle Peninsula from further environmental damage. She no longer sleepwalked and she grew.

In 1973, returning to Marquette from Arizona after her husband Munro’s death, Julia discovered bulldozers, barges, and large pipes all around Presque Isle. She learned to her dismay that the Presque isle Power Plant planned further development of the Island.

Acting on her outrage, Julia wrote a letter to the local newspaper , founded Superior Public Rights, Incorporated, and began her two year battle to protect Presque Isle from what she considered an environmental disaster.

As Julia remained steadfast in her stance against the pollution possibilities of the power company, she engaged local and state officials and other politicians and learned more about the inner workings of crony politics.  She learned about political power and the ability of people in high places to control information.

In her crusade to preserve Presque Isle, Julia Tibbitts experienced the perils of acting decisively on controversial issues while living in a small town.  People she believed were her friends for years no longer were her friends.  Other friends had to restrict their friendship and remain silent for fear of economic repercussions from Cleveland Cliffs and other businesses and government bodies.

In her book, Let’s Go Around the Island, Julia K. Tibbitts summarized the lessons she learned from her environmental battle in the hopes that her experience would inspire other people and save them time, mistakes, hassle, and money.

•      Suing a corporation gives the  people suing the right of access to any of their corporate papers relating to the suit, either as a shareholder or as a citizen under the Freedom of Information Act.

•      Manipulating or disguising statistical papers in nearly every field is always a possibility.

•      Challenging an agency like the Michigan Department of Natural Resources can be daunting.

•      Understand that mining corporations have the power of eminent domain in Michigan to condemn private land and supersede the right of private citizens to their own land.

•      Understand that the highest priority of a corporation is making money for its stockholders.

•      Don’t lose your sense of humor or proportion under any circumstances.

•      Don’t  succumb to attacks no matter how painful or degrading.

•      Be prepared for social ostracism.

•      Know that people, especially governments and academics may demand scientific proof  of environmental damage and delay as the damage continues.

•      Know that people who want to preserve the environment from permanent damage and not be swamped by greed, callousness, and dishonesty have to bail out water together to keep from being swamped and sunk in the same boat.

•      Know that there is nothing wrong with the idea of a corporation and the corporation itself as long as it functions responsibly.

•      Believe that where there is no vision the people perish. Believe in idealism and morality and the destructive parts of the corporate structure will soften, greed will dissipate, and  the world can grow.

•      Keep in mind that politicians are the last people to trust!

•      Clarified the fact that the “burden of proof” is on the party who wants to use bottom lands or the public trust to prove that they will not harm them or that there are valid reasons for changing them.

•      Proved that citizens in class action suits like the one that Superior Public Rights Incorporated brought against Cleveland Cliffs to preserve the environment are entitled to have their attorney’s fees paid. This set the precedent for environmental lawsuits because most ordinary citizens cannot afford huge legal fees that corporations pay in such suits.

Julia concluded:  “We carried this kind of thinking all through the night of attack, innuendo, ridicule, secretiveness, lying, cheating, stealing, scorn, and environmental ignorance like a powerful little torch, until we lit up the whole sea of proceedings with these four principles as the decision of the Judge of the Circuit Court of Ingham County dropped the whole mess down on our heads. Eight points brought forward. Eight counts lost. His requirement to make a public park at the unloader site became our one small victory. There it sits.

We rest our laurels firmly on these principles for anyone who cares to see what we really did, behind the action and reaction on the legal-local legislative show out front.

No shadow of anyone lay over the rest of the play or over the empty stage as we left. There is only the feeling that the action we started is going on…and into the horizon like ripples on the surface of Lake Superior,..

The work we did served as a foundational working set of principles for their use, their good, their greater chance of success.

We’ll settle for that.

We ran out of money, not steam. There was no bitterness at the end.  We lost on eight counts out of eight.

And there was no need for revenge; revenge has a tendency to perpetuate itself, and we wanted to perpetuate the values we had all lived by – decency, honesty, integrity, persistence, and love…”

In a 1991 update in her book Let’s Go Around the Island, Julia Tibbitts reported the condition of Presque Isle and the Dead River. She said that smelt no longer ran at the Dead River mouth as they had for decades because they could no longer navigate up the river to spawn because of the power plant operations.She said that the Power Company had added more buildings to the site. The coal pile, unprotected for decades by cement or plastic flooring, is larger and still seeping toxic chemicals, including mercury, into the ground water, Dead River, and Lake Superior. Fly ash continues falling in the Island woods , Lake Superior, and the air. Tons of it a day.

Julia stated that she had contributed  $160,000 of her personal funds to Superior Public Rights to conduct its lawsuit against Cleveland Cliffs. She commented that in The Bridge Across Forever Richard Bach says ‘I have paid my dues to my hometown for the next three lifetimes.’ That’s nice to think about.”

Julia Koch Tibbitts died on March 12, 2008, at the Tendercare Health Center in Munising, Michigan. She was 90 years old.

Many people encountering Julia K. Tibbitts during her crusade against the power company and federal and state agencies called her an “extremist,” and typecast her as a person preferring trees to people. Acting on the courage of her convictions, Julia  battled to preserve both.