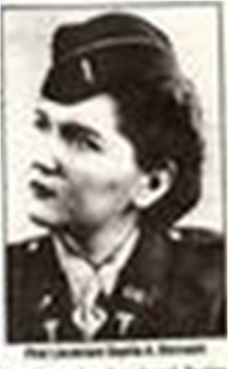 Sophie Biernacki Kwiatkowski trained as a nurse and found herself in the Army during World War II, nursing wounded soldiers and helping to build a hospital In the late 1980s, Sophie A. Kwiatkowski was the proud commander of the American Legion Jane Delano Post 408, an all nurses unit. In 1944, Sophie Biernacki was nursing in New Guinea in a hospital that originally consisted of the remains of a Papuan mission surrounded by high kunai grass. Doctors, dentists, technicians, nurses and clerks joined forces and actually built the military hospital that served the sick and wounded soldiers evacuated from all parts of New Guinea and other islands in the Southwest Pacific.

Sophie is Raised and Trained in Chicago

The story of Sophie’s travels from her native Chicago to the Jane Delano Post in Milwaukee , Wisconsin, spanned a 50 year nursing career. She was the daughter of Mr. and Mrs. Bartholomew Biernacki. Her father worked at the Carnegie-Illinois Steel Corporation, South Works, for 40 years while he and his wife raised a family of three boys, Stanley, Aloysius, Bernard, and Sophie, the oldest child and the only girl. She graduated from St. Michael’s Grammar School and Holy Family Academy and took her nurse’s training at St. Mary of Nazareth Hospital.

Sophie remembered St. Mary’s Hospital as it was 50 years ago. “It was staffed by students, some of us started as early as 15-16 years of age. We were under the supervision of Nazareth nuns who were nurses. The nuns prayed most of the day with keys to the linen and narcotic cabinets in their pockets. If a need arose, someone hot-footed to the chapel for the key to avoid a catastrophe. Lawsuits were not in vogue at that time.”

Life as a Student Nurse

The student nurses worked from 7:30 to 7:30, with three hours off during the day to attend classes. They kept this schedule for seven days a week with an occasional half day off if a nun supervisor felt that she could spare the nurse. The students paid $25 for their uniforms and their salary was a stipend of $6 a month the first year, $7 the second, and $8 the third. According to Sophie, most of their money was used to pay for broken thermometers, syringes, bottles of Lysol or distilled water.

Roll call was at 6 a.m and most students dressed as they ran down the steps to say “present.” Sisters from Poland prepared breakfast and watched over the students like mother hens. They wanted to be sure the students built up enough strength to work 12 hour shifts, so they fed them polish sausage, homemade bread and scrambled eggs with brains, which was considered a delicacy.

After graduation, Sophie faced the task of finding a job, a formidable one in those Depression days. In 1937 she found a job as a staff field representative for the American Red Cross, teaching first aid and home nursing.

After Pearl Harbor, Sophie Joined the Army Three months after Pearl Harbor, on March 19, 1942, Sophie joined the Army and was commissioned as a first lieutenant. Her first Army assignment was at Camp Grant, instructing Army Corpsmen in nursing. After a few months, she drew overseas duty and was assigned to the 117th Station Hospital. Nurses from Camp Grant found themselves on a troop train packed together like sardines, in a car behind the engine. Of course there was no air conditioning and opening the windows encouraged a cloud of coal soot to come in and drift all over the coach.

Four days later, the nurses arrived at Camp Stoneman, California, and were billeted in a huge army barracks. They spent days filled with physicals, drills, hikes, and obstacle courses.

Climbing a Wall on Rope Ladders

“Have you ever climbed a wall on rope ladders? Let me assure you, this is no easy task, but this was in preparation in case we had to use this method to climb aboard a ship,” Sophie recalled with feeling. “Soon we shouldered our musette bags and marched with combat boots that caused dollar size blisters on our feet. We boarded a ship that took us down the Sacramento River to the embarkation port of San Francisco and again we marched across the pier to another ship. The Klipfontein, a small Dutch ship, was to take us to unknown parts of the world across the Pacific.”

Across the Pacific to Combat

Father Diamond, the ship chaplain, and his five assistants did much to relieve the tension and apprehension aboard, according to Sophie. The troops and the nurses knew that they were traveling through mine fields and submarines ready to bomb any ship in the Pacific. For a time, the nurses thought that they might be joined by a convoy, but eventually it became obvious that their ship was traveling alone, depending on the speed and machine guns for protection. They zigzagged across the Pacific, not knowing their destination.

Every dawn and dusk, which were the most dangerous hours at sea, they had muster drills where they had to dress in full combat regalia of helmets, gas masks, canteens and mess kits. “Can you imagine going down the side of the ship on rope ladders, losing your grip and going into the ocean?” Sophie asked.

Twenty-one days later, the ship arrived in Australia, crossing the ocean without incident. After a few months in Australia, the nurses packed again and journeyed on an Australian Troop Train to Townsville. At Townsville they boarded the Australian ship HMS Canberra and sailed north on the Coral Sea inside the Great Barrier Reef to Port Moresby, New Guinea.

The new hospital was built in a valley protected by low ranges of hills and facing the Coral Sea. The doctors, nurses, dentists, technicians and clerks built 31 wards and lined the area with cement walks, painted stones and flower borders. Everyone had to adjust to the high temperature, tropical rains and dust, but life had its high points. Between January and June 1942, the 117th nursed 5,000 men providing them the best of care.

Sophie is Transferred to the Philippines

In June 1942, the 117th ceased operations and the nurses packed and waited for their new assignments. Finally, they boarded a ship, destination unknown, which followed the coast of New Guinea. After a few weeks they found themselves boarding another ship, this time a clean, comfortable ship called Hope. A torpedo narrowly missed the Hope and the nurses received a commendation for their cool behavior. Eventually they arrived at their destination which they had guessed by now to be Leyte in the Philippine Islands, to be greeted by air raids, torrential rains, and knee-deep mud.

Sophie described the conditions on Leyte graphically, “On Leyte an empty school building was being used for casualties. Most of the wounded or sick G.I.’s were still in their combat clothes and were lying on bare cots crowded together until there was scarcely room to walk. We did our best to make them comfortable in spite of the almost ceaseless rain, occasional typhoon and the ever present mud. Harassing enemy air raids did not make our task any easier.”

Shortly after she received her captain’s commission while she was serving in the Pacific, Sophie developed a skin condition that needed special attention stateside. Her tour of duty overseas was terminated.

“I had to say goodbye to the 117th where we had become closer than biological sisters and brothers. We had cried, laughed and even buried some of our people and lived through some terrible sights and experiences.”

Flying back to the United States with only the clothes on her back, Sophie’s route included Guadalcanal, Hawaii, and San Francisco. She stopped in Clinton, Iowa, and at Gardiner General Hospital in Chicago for treatment. While she was at Gardiner, she met Max Kwiatkowski, who was also a patient there. Eventually they married and Sophie was finally discharged from the Army on March 19, 1947.

Thirty years later, the 117th had its first reunion in Chicago and nurses attended it from all corners of the world. “Again, there were tears of happiness, laughter, talk for three days and we have been having reunions of three years, alternating between Chicago, Milwaukee, and Minnesota,” Sophie recalled.

During these years, Sophie raised three children of her own and nine foster children. She returned to the Red Cross i Milwaukee as an instructor, accumulating 25 years with them, and spent 13 years with the Visiting Nurse Association as director of home health services.

Sophie Said, "I Am Proud to have Served!

Sophie was just as proud of her association with the Jane Delano Post in Milwaukee as service officer, chaplain and commander. She summed up her feelings about her World War II service, “As I reflected on my World War II experiences, I did not realize that I had tucked away very safely in the recesses of my memory some of the experiences and sights I did not wish to share with anyone. But now I have shared them and I am proud to have served!”