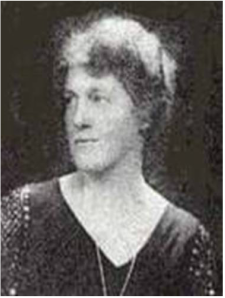 Olive Higgins Prouty, an American novelist and poet and mentor of poet Sylvia Plath, was a transitional woman between women’s suffrage and women’s liberation. She loved her family, but she loved her craft as well and her society told her that she couldn't enjoy both at the same time.

Born on January 10, 1882, and dying on March 24, 1974, Olive Higgins Prouty lived in a time when few people actively questioned the societal ideas that women could best find fulfillment in a subordinate role to men and they couldn’t reach their full potential without the help of a man.

Drawing on years of experience Olive Higgins Prouty asserted that for the sake of both men and women and their relationships, women needed to develop independent judgment, a clear-eyed view of life, and a definitive acceptance of personal responsibility for their actions. Her short stories and ten novels illustrate how American women managed to preserve integrity in their lives despite the stifling roles that society assigned to them.

Olive Higgins Prouty’s novel, Now, Voyager, a trailblazer in the advocating of psychotherapy, was made into a movie with Bette Davis as the star. Stella Dallas, her feminist melodrama, was adapted into a stage play in 1924, and served as a basis for three films – one in 1925, one in 1937, and one in 1990. The 1937 version starred Barbara Stanwyck and was nominated for two Academy Awards. The 1990 film, titled Stella, starred Bette Midler.

Stella Dallas also served as the basis for the radio serial Stella Dallas, which played every day on the radio for 18 years, from 1937 to 1955. Olive Prouty had not authorized the sale of broadcast rights for Stella Dallas, and she didn’t like the portrayal of her character, so she instituted unsuccessful legal action to prevent the program from being broadcast. Stella Dallas is often credited with being the first soap opera.

Although Stella Dallas and Now, Voyager, earned her the most recognition, Olive Higgins Prouty wrote poetry throughout her life. Her poems provided a significantly more intimate look into her life than her  novels and they were powerful and emotional, revealing ideas that were radical for her time. The poems were never published during Olive Prouty’s lifetime, but in 1997, her children, Richard Prouty and Jane Chapin, published her poems in a limited release edition.

Olive’s mother, Katherine, also participated actively in the growing Worcester community. She founded the Parent Teacher Association (PTA) and advocated for the PTA in many states throughout her life. Katherine also served as superintendent of the Sunday school at the First Congregational Church in Worcester and when Olive turned 13, Katherine insisted that she join the church. Olive had ambivalent feelings about the church, notching the distance between the zeal in church and the shallow spiritual experience in everyday life.

Although she loved poetry at an early age, Olive wasn’t a stellar student in her early years, a fact which possibly caused her nervous troubles later in her life. From high school on, Olive knew that she wanted to be a writer. She graduated from Smith College in 1904, with a Bacehlor of Arts degree in Literature, determined to start a writing career and earn her own living.

Olive Higgin’s family pressed her to return to Worcester and follow the traditional path of marriage and motherhood. Bowing to family pressure and courted by Lewis Prouty, the older brother of a college friend, she married Lewis Prouty in 1907. The Prouty’s moved to their home in Brookline, Massachusetts in 1913.

Olive feared that marriage would end her hopes of creating a writing career for herself, but lewis turned out to be supportive of her ambition and encouraged her to take writing courses at Radcliffe. He introduced her to the editor who accepted her first stories.

Olive Higgins Prouty is “Constantly Torn” Between Career and Family

The Prouty’s had four children – Richard, Jane, Anne, and Olivia. Two of them, Anne and Olivia, died at young ages. Olive’s first novel, Bobbie, General manager, was published in 1913, and by 1920 she had published three novels and a book of short stories. Between her husband’s income, her own writing, and an inheritance from her father, the Proutys were quite prosperous. Olive found that decorating their large home, supervising the children and fulfilling her social obligations overflowed her days so much that she had to finagle time for her writing. She didn’t want to challenge her husband’s status as breadwinner, so she pretend that her writing was just an incidental hobby. Of those years she wrote, “I managed to give the impression that I just dashed off, at spare moments, those short stories or an occasional light novel.”

The Prouty’s third daughter Anne died shortly after she was born in 1919, and Olive decided to devote herself to caring for her children and redirect her writing. The Prouty’s daughter, Olivia, was born in 1922 and she died of encephalitis in 1923. Partially as a way of coping with her grief over Olivia’s death, Olive wrote Stella Dallas, a novel that features two good mothers. One of them is the working class heroine Stella Dallas and the other is the wealthy widow who becomes the foster mother to Stella’s daughter, Laurel. Stella Dallas immediately became a best seller.

In 1925, Olive suffered a nervous breakdown, in part because of Olivia’s death. She spent sme time at the Riggs Foundation in Stockbridge, Massachusetts, and her psychiatrist, Dr. Austen Fox Riggs, advised her that she should treat her writing professionally. He told her to rent a room outside of her home and set a daily writing schedule to be followed there. This freed up some writing time for her and she was always grateful to Dr. Riggs for his prescription. She wrote two of her novels, Conflict and Now Voyager, using her experience of breakdown and recovery.

Over the two decades of the 1930s and the 1940s, Olive Prouty accomplished the most important work of her career and earned the most professional recognition. She felt guilty about her writing, considering it a mostly selfish way to spend her time and when she received what she considered “so much in payment unnecessary to our welfare,” she took charitable action.

Olive wrote her last novel, Fabia, in 1951, the year Lewis Prouty died. She lived quietly in the house in Brookline, Massachusetts, where she and Lewis had moved in 1913, writing less material in other areas, but continuing to write her poetry.

Obeying her social conscience, Olive Higgins Prouty donated most of the money she made from her writing to charity and she became well known for her philanthropic works. She met the poety Sylvia Plath when she endowed Smith College with a scholarship for “promising young writers.” Olive Prouty had a complex, personal relationship with Sylvia Plath and Olive paid for the medical expenses from the poet’s unsuccessful 1953 suicide attempt. Later, Sylvia Plath used Olive Higgins Prouty as the basis for her satirical character “Philomena Guinea” in her 1963 novel, The Bell Jar.

Both Sylvia Plath’s damaging wit and the changing times eroded Olive Prouty’s reputation as a novelist. With the changes in the status of women after they won the vote in 1920 and the changes in their roles that the decades of the 1930s,1940s, and 1950s brought, Olive Prouty’s books about the separate identity of women seemed irrelevant. More modern readers read them as an endorsement of middle class conformity and not a serious radical exploration of freedom within socially confining roles. In 1961 when she wrote her memoir, Pencil Shavings, Olive Higgins Prouty couldn’t find a publisher for it and she had to print it at her own expense.

Olive Higgins Prouty wrote intimate and powerful poems about nature and about her family. Many of her poems were centered on her personal thoughts about her husband and her children. She also wrote about her feelings about her life and her perceptions as she grew older, but she probably never imagined that her poems would be published.

On March 24, 1974, Olive Higgins Prouty died in Brookline, Massachusetts.  In 1997, her children Richard and Jane released Olive Higgins Prouty’s poems for publication. The Friends of the Goddard Library published her collection, Between the Barnacles and Bayberries and Other Poems, at Clark University.